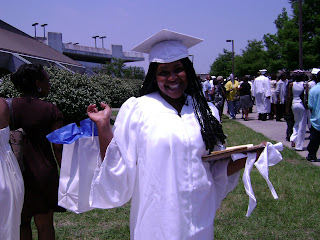 Meet Bernadette. She graduated from high school this month. She came to Friendship House wanting to work toward her GED. She had attended school before Hurricane Katrina and then took the required tests for graduation but somehow got lost in the system. She called the school board requesting her scores but they never would give it to her . She figured she didn't pass and gave up on trying to get her test scores.

Until 2 years later she came to Friendship House and met Michelle. Michelle is our US/C-2 missionary that has her MSW degree and is working toward her license. She started working with Bernadette to prepare for the GED test until she found out the whole story. Michelle called the school board and found out what Bernadette had been waiting for 2 years to know... she had passed the test! She was technically a high school graduate!

All it took was a phone call from our social worker to find out that Bernadette had passed her test. She had to wait two years to find out, but she did not let that stop her. She was so excited and immediately worked toward participating in this year's graduation at her high school.

Bernadette has so many plans for her life. She is working toward attending college in the Fall and has a goal of being a nurse. Please pray for her as she takes these new steps in her life.

Promote Your Page Too

We are a mission center in the heart of New Orleans. We have a transitional housing program for women with children. We also provide programs for women in the community such as GED tutoring, computer skills, job readiness skills, Bible Study, etc. We also provide case management and emergency ministry such as hygien and food to homeless in the community. We also work with girls during the summer in our preventative program called Up2HOPE.

Subscibe to this blog with email!