A Week of Opportunities

We have had a very busy last few weeks at Friendship House, that have included two awesome opportunities that we are so excited to share. On September 7, 2010 several of the staff members were able to assist with a Feed the Children drop that was here in New Orleans. The NFL Players Association sponsored this drop along with the Teamsters Union. Two truckloads filled with boxes of food were handed out to people in the community. Thankfully, we had plenty of people to help because we lacked a fork lift to unload the trucks. With assembly lines stretching across the parking lot, we were able to successfully unload the trucks as cars began to line up.

Based on the number of people in the household, each family received a food box, a household goods box, and a case of water. The food boxes include canned goods, cereal, rice, and spaghetti and will feed a family of four for ten days. The household goods box provides the family with hygiene and toiletry items, along with other things that are needed in a house. 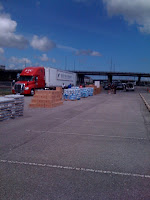 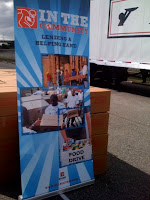 We had an awesome time getting to spend time with several NFL players, both current and retirees. We got to visit with John Stinchcomb, Deuce McAllister, Mike McKenzie, Chuck Commiskey, and several other players. Many of these guys have helped Baptist Friendship House food pantry through fundraisers for Feed the Children. 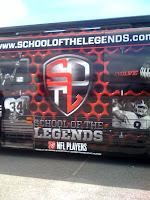 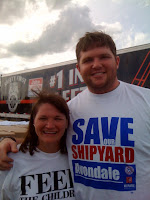 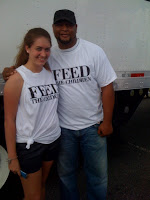 As you know, the week leading up to the NFL Kickoff was a busy time for New Orleans as we prepared to cheer our Saints to a victory on Thursday September 9. We were invited by Cherry Blackwell with Lagniappe Ministries to volunteer and help prepare the floats that were in the NFL Parade. We were also invited to attend the concerts that took place prior to the game. We are very thankful that Cherry allowed us to be a part of this experience.

Dr. Kay helping load coolers filled with cold drinks on to the floats 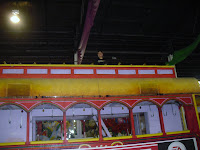 DeShannan helping on top of one of the NFL Parade floats

Michelle working on top of another float
Posted by Baptist Friendship House at 9:37 AM

Promote Your Page Too

We are a mission center in the heart of New Orleans. We have a transitional housing program for women with children. We also provide programs for women in the community such as GED tutoring, computer skills, job readiness skills, Bible Study, etc. We also provide case management and emergency ministry such as hygien and food to homeless in the community. We also work with girls during the summer in our preventative program called Up2HOPE.

Subscibe to this blog with email!